History Repeating: How the past several years have re-established Olney as a home for educational and community improvement

It wasn't long ago that the building at 100 West Duncannon Avenue contained two schools: Olney East & Olney West—both of which were included on the Persistently Dangerous Schools list by the Pennsylvania Department of Education. With their combined numbers, the two schools listed over 100 incidents involving police per year, over 60 arrests per year, and an annual 90+ students either expelled or assigned to an alternative educational youth disciplinary placement.

It was clear that the first thing Olney needed was to establish a calm environment conducive to learning. This effort began in September of 2011 when, under the School District of Philadelphia's Renaissance Schools Initiative, Olney East and Olney West were merged into one single entity: Olney Charter High School. The management and transformation of OCHS was undertaken by ASPIRA. 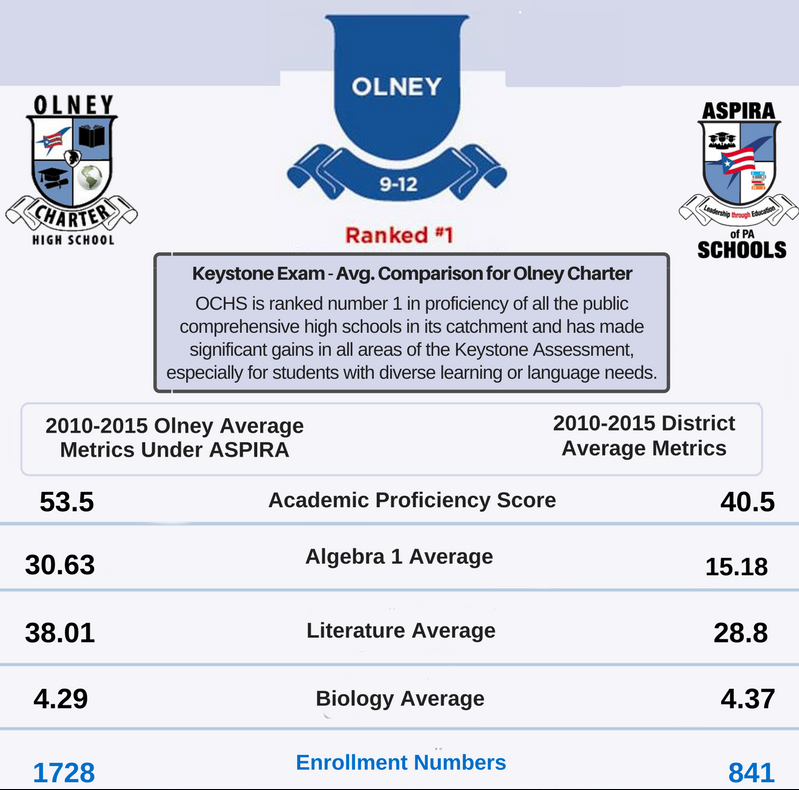 The initial focus for ASPIRA was to take steps to make the school immediately safe and establish a long-term culture of learning for our students. As is indicated by the PA Dept. of Ed. metrics on the sidebar, this was done with resounding success. The dramatically improved climate and the consistency of teaching staff has positively impacted the student enrollment and academic outcomes of Olney. The school also implemented a Parent Task Force, Parent Empowerment Center, and Student Excellence Center within the school.

Olney Charter High School now serves more than 2,000 students in grades 9-12. Since 2011, Olney Charter has received significant local recognition and has out-ranked 14 other comparative high schools according to the School Performance Profile Score. Measures of academic progress continually emerge due to the combined efforts of staff, students and the families that invest in Olney's future.